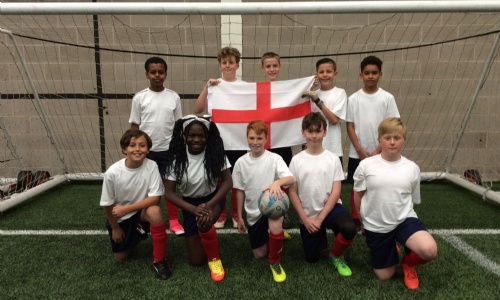 32 schools took part in a world cup format tournament, each representing a competing country for this years world cup.

First up, Tunisia vs England. As the first teams to play in our group we were feeling nervous.  We played well and thanks to an INCREDIBLE back heel goal from AJ we won 0-1!

Next up, England vs Panama.  Feeling more confident after our first win we played lots of attacking football, controlling the game from beginning to end.  With a great goal from Jacob, and AJ grabbing his second of the tournament (with thanks to Lucas ;-P) we win 2-1.

St. Joseph's were denied the satisfaction of winning all their group games due to Belgium not turning up.  However, given a free win meant that we topped our group and were through to the last 16.

After a well earned rest and some fun in the indoor skills area, we went again, England vs Poland.  After watching the opposition in the group stages we felt positive that we could win.  Goal number three from AJ plus two from Harry (and one puzzlingly disallowed goal from Harris) meant that we cruised into the quarter finals.

As the games got progressively harder we had our biggest test yet, England vs Costa Rica.  We conceded early and were on the back foot.  The team dug in and frustrated the opposition with some solid defending and were awarded with a superb far out wide goal from Jack.  A lapse in concentration allowed Costa Rica to pinch another goal putting us behind again, and as we went all out for the equaliser in the closing seconds conceded a third, 1-3.

The team were understandably disappointed by being knocked out, but they all greatly represented St. Joseph's and England.  We finished the day with a friendly from another school and watched a close final won by Greenhill (Australia).